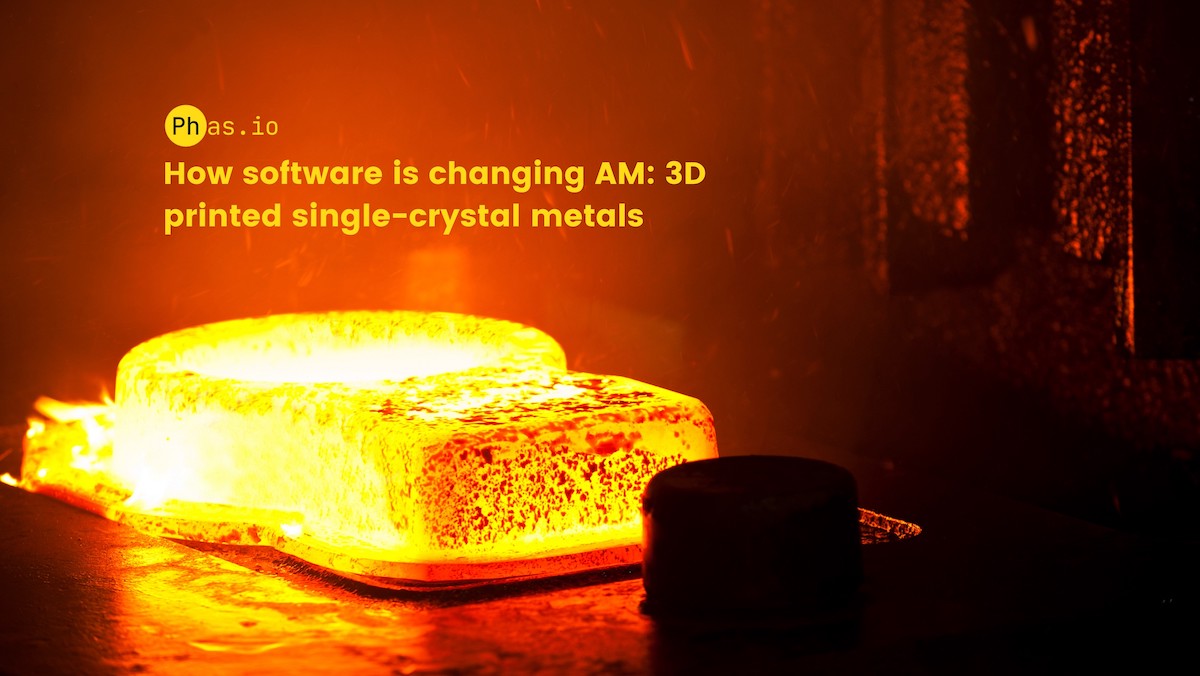 How software is changing AM: 3D printed single-crystal metals

There’s a miniature focus of science that’s keeping you safe as you fly and making your phones faster. It’s called grain orientation engineering, and it’s really interesting. In recent news, a huge development was made that makes the process less expensive and even faster. This could go beyond just airplanes and phones and start making your cars stronger and more reliable. In this piece, we’ll talk about grain orientation engineering, why it matters, and a recent 3D printing innovation that changes it all.

To get started, let’s go through a standard example of grain orientation. It can be found right on a common airplane. If you take a look at the front part of the massive engines, you’ll see some big fans.

This is the intake of the engine, and the blades of these fans are an example of grain orientation.

While the plane is soaring through the sky, these seemingly unimportant blades are doing all the heavy lifting. They’re sucking in air, compressing it, and priming it to be combined with gas then ignited. Without the blades, there is no thrust which means no flight.

During this process, these thin blades are exposed to some insane thermal stresses. These stresses can completely destroy the blades if they aren’t designed correctly. Later, you’ll understand how this relates to grain orientation.

We all know how dangerous stress is in our personal lives, but thermal stresses are detrimental to designed pieces.

In most cases like the airplane blades that we just talked about, these stresses are the sole reason why a part fails.

When you heat up metal the material physically expands. That’s why bridges have all those expansion joints built in. Sure, you’re not going to notice your stove getting bigger in your kitchen while it’s cooking, but it’s happening on a miniature level.

When the airplane’s turbines experience thermal stress, it can cause the piece to break and leading to a disaster. The reason why has to do with the material composition.

If you look at a highly magnified picture of a piece of metal, you’ll notice a lot of crystals. There’s a whole subsect of science revolving around these crystals called crystallography. We’re going to keep things simple, though.

These crystals come in different shapes, sizes, and configurations. They are the reason why some metals are strong and the others are not. It’s all thanks to crystals.

However, there’s a big problem with all of these crystals — how they’re connected.

When a part fails after a thermal or physical stress, it typically breaks between crystals. If you’ve ever cleanly broken off a steel handle, it is because there was a defect between the different crystals and it reached its critical length before the additional force helped it break apart.

Looking specifically at thermal energy, the orientation of the crystal is a big deal. Some orientations behave very well at high temperatures and some do not. This can cause micro-defects to develop which can lead to catastrophic failure.

The Power of Grain Orientation Engineering

After learning that, you probably have some thoughts. If you don’t want the steel handle to break off, maybe you could manipulate these crystal arrangements and make it stronger.

The idea is that while you’re making a material, you try to force the crystals to be set up a certain way. Different orientations can be better for scratch resistance, shatter proofing, thermal resilience, or overall durability.

It’s almost like “hacking” the material that you’re building. As we mentioned, the crystalline structure dictates most of the material properties of a part. If you’re able to change this structure (which engineers and scientists are), then you can mechanically optimize the part you’re making.

This is grain orientation engineering. The idea of manipulating an object’s crystalline structure in order to optimize the mechanical properties of a part.

In fact, there’s even a way to reduce the number of grains in a part. This reduces the number of fault lines. Making a part with just one crystal is called a single-crystal unit.

This idea is the best-case scenario when it comes to thermal resistance, fatigue resistance and higher melting points.

The resulting part will have a less dramatic thermal expansion which is really great news.

Industries which are benefited from single crystals:

The manufacturing of single-crystal parts dates back to 2500 BCE when people were making large-crystal salts since they were more pure. Now the technology and science have advanced dramatically.

As we highlighted, there are a number of industries that benefit from these single-crystal parts. Even so, the process is not cheap. At all.

If you look at a plant that makes single-crystal turbine blades, they’re probably using the Bridgeman method. This is one of many hyper-complex casting techniques that takes a lot of time, expertise, and money. Lots of money.

A manufacturer could easily spend 6-figures to create a single part.

Clearly, this is a huge issue. When prices get that high, hard decisions have to be made. Only companies with deep pockets can afford to spend so much on single-crystalline parts, despite there being so many benefits.

How could this technology break into the consumer market? The first step is to reduce the cost of manufacturing.

Whenever you see “reduced cost” and “manufacturing” in the same sentence, your brain should automatically jump to 3D printing. In this case, additive manufacturing might be the solution to this very expensive problem we just discussed.

Our co-founder and CEO at Phasio, Sudharshan Raman, just recently co-authored a paper all about this. He and his team at AddMe used an SLM 500 3D printer and successfully printed single-crystal metals.

The best part? They printed these metals at a fraction of the cost of the existing process. This is something that was unthinkable just a decade ago.

They achieved this by adjusting the angle of attack on the laser of the 3D printer. Changing the angle allows the user to finely control the metal crystal while the part’s being made.

We’re still in the early days of this, but there is some incredible promise. The ability to transform this manufacturing process saves countless hours and big money in the long run.

The Next Steps with 3D Printing

Our goal is to scale up this test and bring it to the market. As technology gets better, you can expect to see single-crystal products popping up on shelves near you. More efficient motors, gearboxes that don’t fail, and drill bits that don’t break are just a few potential uses.

The only way this is possible is through more experimentation and testing on 3D printers. However, it’s hard for a company to design the hardware, build the software, and distribute them to their users.

This is where Phasio comes in.

How Does 3D Printing Software Help?

At Phasio, we offer 3D printing software that expedites the process. We link different printers to a central system with a single layer of software. This allows researchers to work faster and make bigger strides.

It’s equally useful for businesses that use any level of 3D printing. Faster turnarounds and lower operating costs are just the beginning.

If you want to learn more, you can reach out to us today. Our team can give you a free demo of our software and get you started today.

How an instant quote button is the best sales enabler 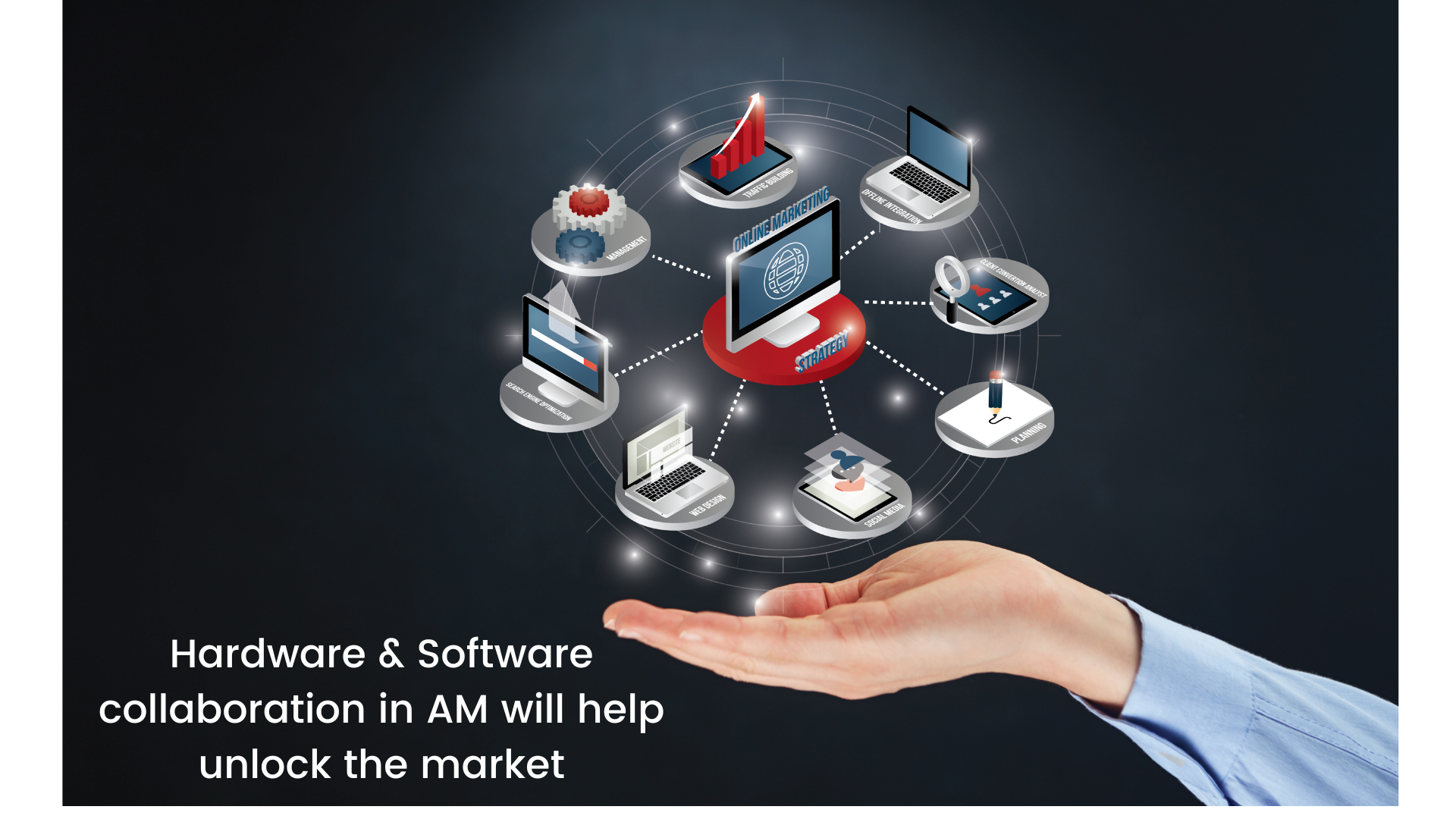 Hardware & Software Collaboration in AM will help unlock the market 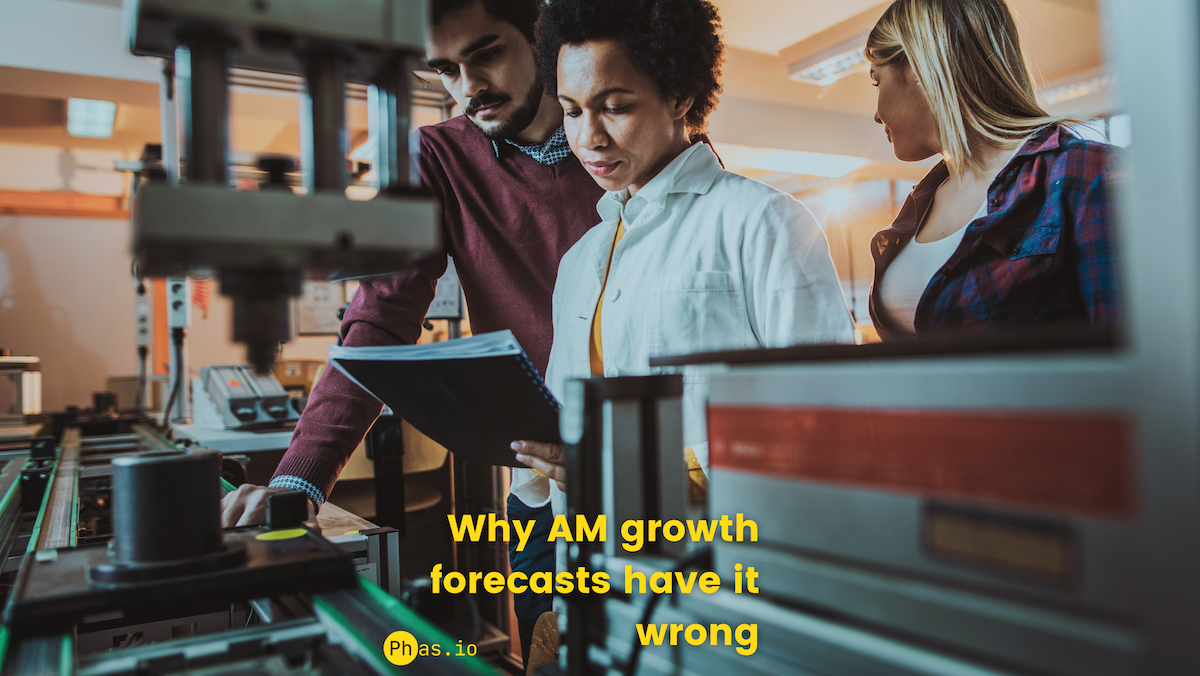 Why AM growth forecasts have it wrong